June 05, 2014
Linoleum as a material for printmaking has been used for nearly a hundred years now. Normally, you cut an image out using special gouges similar to woodcut tools, cutting away the lino around the image you want to print. This is called relief printmaking, because if you look at the block from the side, the material that remains stands up in relief from the backing material. You then roll ink with a brayer over the surface of the block, place paper over it, and either print by hand or run it through a press. You can do complex things this way (for example, reduction linocuts), but the beauty of the process is that it is quick, simple, and direct.


A few years ago, I saw some prints that were classified as coming from etched linoleum blocks, and I loved the textures I saw in them. In the last few months, I've been trying to use this technique in my own studio, learning about it as one does these days from websites and YouTube videos. I've also had email exchanges with several printmakers around the world who have shared their experience with me. I've found that, despite all that information, I still had to tweak some of their advice in order to get the process to work, so here are the results of my research.

Materials you need: caustic soda crystals; wheat paste; a hard ground resist or stop out varnish; lino blocks (battleship grey or the golden lino with a wood backing are both fine); a square or rectangular glass dish that your lino block fits into; chemical resistant rubber gloves that go up to your elbows; a mask to cover your mouth and nose; plastic glasses to cover your eyes; glass jars; Starbucks stir sticks (invaluable, I always grab handfuls of them whenever I get coffee there). Plus standard printmaking supplies like inks, paper, etc.

The best resist I have found so far is Lascaux hard resist, for its versatility and its non-toxicity. It is expensive, though, so an alternative is an acrylic varnish such as GAC 200. These materials, including the caustic soda, are fairly non-toxic, too, so they can be washed away in a sink and not pollute the local water systems. In the USA, you can buy caustic soda crystals from True Value, in the form of Rooto drain unclogger. 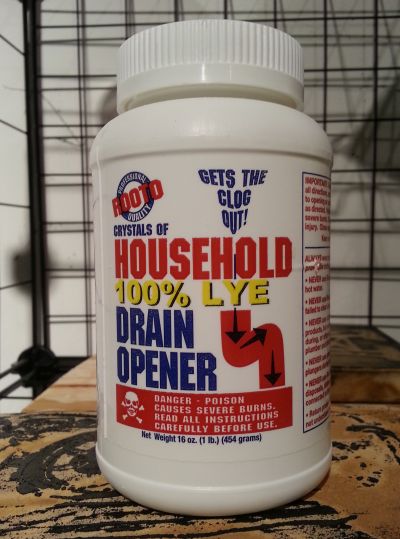 Use the resist to draw an image directly onto the lino block. This method means that every part of the exposed lino will be attacked by the etchant. You can also draw using negative space, so that the central object in your picture is exposed lino, with the rest of the block covered in the resist: 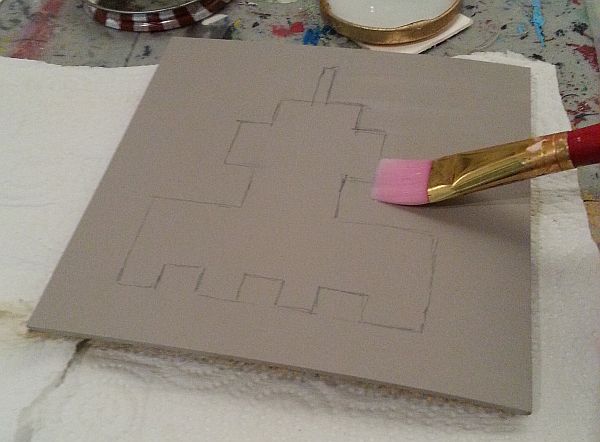 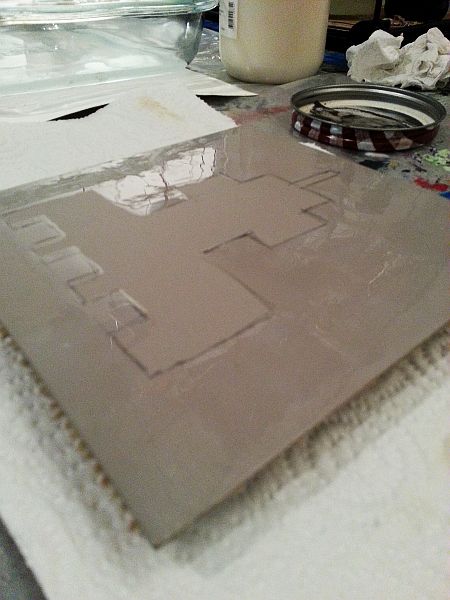 In the photo immediately above, you can see the image in the centre consists of exposed lino, with the shiny areas all around it showing the Lascaux resist.

When the resist is dry, you can make further marks in it with an etching needle, steel wool, etc. Now you prepare the etchant.

WARNING: this stuff will burn the fuck out of everything it touches, especially when it's added to water, but you don't even want the crystals getting on your skin, either. So make sure you are wearing the protective gloves and mask when you do the following. 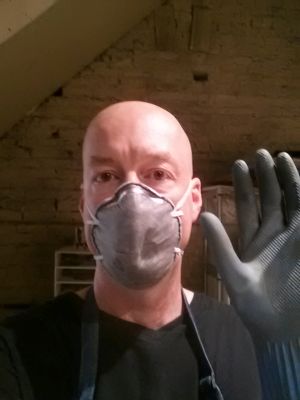 Mixture for two 6" x 4" lino blocks: put one eighth of a pint of cold water in a glass jar, add half a teaspoon of wheat paste, stir it with a stir stick until it dissolves. Wait five minutes for the wheat paste to gel. (The wheat paste makes the etchant adhere slightly to the block and stops it from being a pure liquid mixture that will just run off the lino block when you pour it on.) Then add four heaped teaspoons of the caustic soda crystals, stirring it into the mixture with a wooden stir stick before you added the next spoonful. Wait for three-four minutes for the soda crystals to heat up. WARNING: NEVER add water to the crystals, ALWAYS add crystals to water. Water onto crystals can cause a horrible chemical reaction involving bubbling liquids, green smoke, and a flying caustic sheet of liquid (luckily, it missed me). 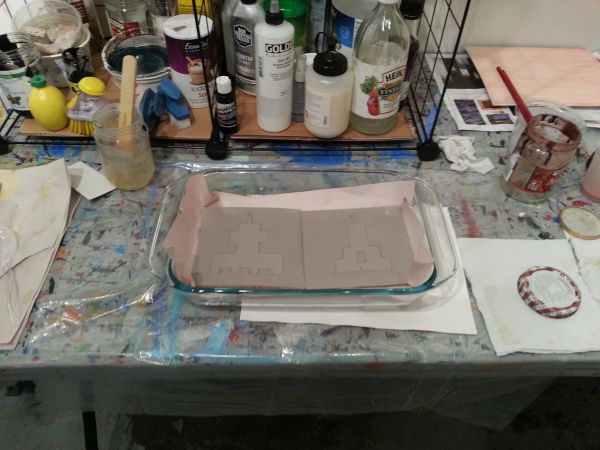 Place a bed of newsprint inside the glass tray, and place your lino block on top of that. Pour the etchant onto the block and brush it out so that the whole block is covered. You want a fairly thick mixture over the entire surface. I like to press the mixture down with the brush on the exposed lino. Place the brush immediately in a glass jar filled with cold water. In a short while you will see the exposed areas of the lino start to turn a different colour as the etchant starts attacking itThe lino will also start to curl, unless it's the kind that comes glued to a wood backing. If you don't like the curling, you can flatten the lino out by placing a block of wood onto the surface.

Some people say that the etchant loses its strength after an hour, but I've found that this is not true. If you want a shallow etch, I recommend taking a piece of card and scraping the gel off the surface after an hour, applying some fresh gel, then waiting another hour. If you want a really deep and varied etch, you can leave the second layer of gel on the block overnight. It will continue to work, slowly, and produce interesting textures and effects on the block, as it continues to burn at different rates on different parts of the lino.

To clean the lino block: wear your protective gear, go to the sink, and pour a mixture of lemon juice and distilled vinegar over the block to neutralise the remaining etchant. Run the block under the tap, and use a scrubbing brush to gently brush away the dried gel and the powdery, scummy looking residue of etched lino. Do this for the front and the back of the block (lemon juice/vinegar then running water). Dab it dry with paper towels. I then wrap the block in more paper towels and place a weight on top to flatten it out and/or speed up the drying time.

Inking the block: you can ink the block either relief (rolling ink over the surface with a brayer), or intaglio style (scraping ink across the block, then wiping the excess off with tarlatan). If you use the intaglio method, you may need to employ an old toothbrush to press the ink into all the holes, pits, and crannies of the block. Dampened paper also works best, printed via a press, so that the paper gets pressed down into all the levels of the surface.

Sounds complicated? It is, but as long as you take precautions to protect your skin and your lungs, it's a fascinating way to make a print. Here is a quick recap:


The best online information I found about this method is by an English printmaker called Steve Edwards. He makes prints that combine up to three or four etched lino blocks. Here is a link to the first in a series of posts he wrote about his method:

I also found a blog by a recent graduate in London, Ruth Selig, who took Steve Edwards' method and really did some great things with it, producing a series of large-scale abstract etched lino prints. She wrote a set of 20+ blog posts documenting her progress, and the link below takes you in at the point where she's trying out different strengths of etchant and a different resist:

Happy printmaking! And do please use the comments section of this blog to let me know if you try this out yourself or if you have any questions I might be able to answer.