It's actually eleven years and one day since I published my first post on this blog: that doesn't sound as bookendish as "decade", which clearly I forgot to celebrate a year ago. This is the text of what I published on December 21st, 2009:

Praeterita was the title of the great English writer John Ruskin's reflections on his life. In a sense we are always looking backwards at things that are now past as soon as we try to describe our experience. Ruskin's choice of the Latin word, with its archaic and somewhat grandiose feeling, was well-suited to his manner of thought and his writing. I have chosen to echo it not just from philosophical principle, but because my work involves reflections on personal narrative - mostly a childhood growing up in an English mining town in the 1960s and 1970s.

Ruskin also said that he would write "frankly, garrulously, and at ease; speaking of what it gives me joy to remember at any length I like ... and passing in total silence things that I have no pleasure in reviewing." And Ruskin did indeed omit much of what would fascinate a modern audience (such as his unconsummated marriage to one of the Pre-Raphaelite's models). Although Ruskin would have been appalled at the contemporary desire to reveal every aspect of our selves to as large an audience as possible, those words seem to me like a good definition of how to write a blog.

And so I end my first  - short, not very garrulous - blog posting.

The way that I used my blog evolved quite quickly. First, I learned that a more conversational and less formal tone is better for the blog format. Second, I began to write about other artists at least as much as I wrote about myself. In fact, during the following year of 2010, I was writing two or three short posts a day, and I published a series of interviews with and short films about dozens of other artists. The frequency of posting has dropped significantly, as I and the rest of the world gravitated towards the newer forms of social media. But the 12 posts of 2020 have largely followed the pattern established a decade ago.

My second blog post was about a sequence of etchings that I began in London in the late 1990s, depicting moments from one chapter of Ulysses by James Joyce. Coincidentally, I have recently finished editioning those copper plates.

So it's appropriate that I include the first image that I ever posted, of an etching that I finished the edition for just last week. Beg!, etching, aquatint, drypoint, 11" x 14": 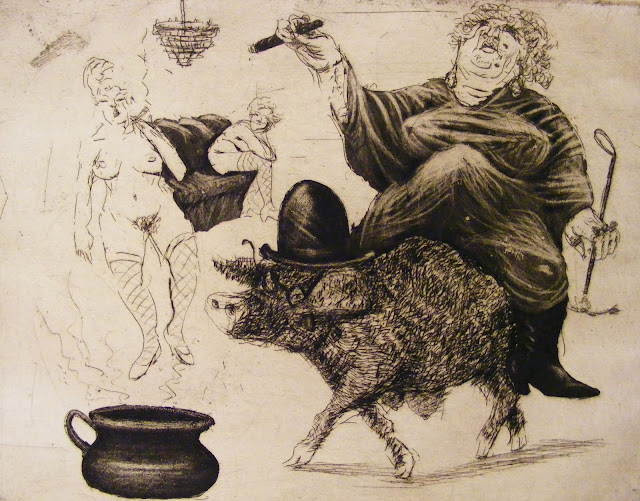