April 30, 2012
A few weeks ago, I wrote about a student from the Film and Video department at Columbia College Chicago, who attended a workshop that I gave there. A day later, I received an email from Ryan Hoyda, who took the Journal and Sketchbook class during a summer session in Prague back in 2005. In fact, I think that might have been the very first time that Patty and I taught this class.

My memories of Ryan from that class are overwhelmingly positive: a good writer, grappling with some difficult material, finding his way to his own voice. He became absorbed in the visual side of the class, and I remember his drawings to be fluid and expressive. I haven't heard from him for a long while until this recent email, in which he directed me to a website that has a lot of images of the oil paintings he has done in the last few years.

To my delight, Ryan's paintings turn out to be not only not bad: they turn out to be really very good. You can see the influences in his style (post-Impressionist painting, maybe Munch, maybe twentieth century early Expressionism), but they have a vibrancy and confidence which makes them very satisfying to look at: 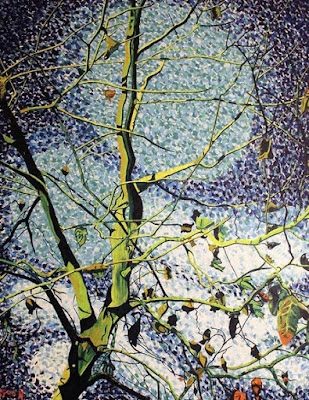 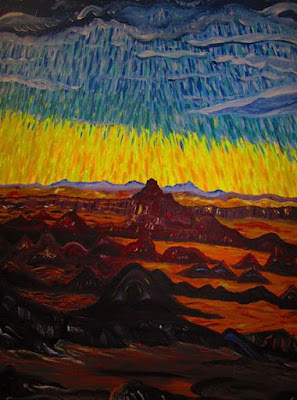 A few years ago, Ryan drove around the entire United States with a friend, documenting everything he saw as he went. As he described it to me:


"Anyway, I’ve been painting now for almost 2 years and have begun to assemble an actual series based on a trip I took back in 2006. A friend and I drove over 10,000 miles in 34 days, camping at various national parks throughout the US eating from vintage Vietnam mess kits.  We took almost 3000 photos and captured about 17 hrs of video. The series, Across America, will be based on approximately 35 pieces from that trip.

I particularly like this painting of a New York City street scene: 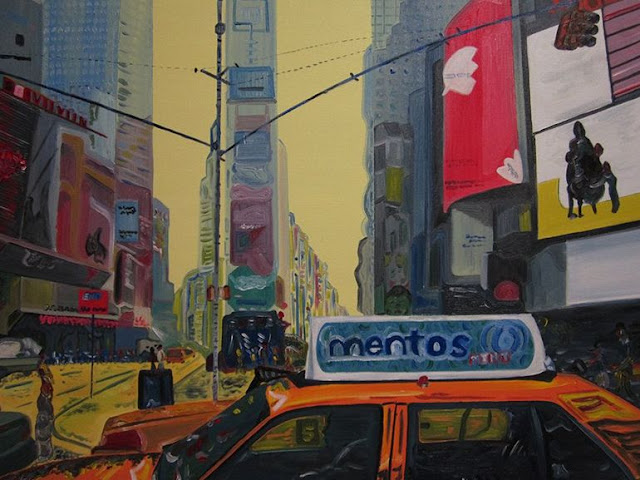 I like everything about these paintings: the brushstrokes, the instinctive handling of high-keyed colours, the free-flowing mark-making, the sheer pleasure in making a picture with oils, that most expressive of media.

If you want to see more of Ryan's painting and keep up on his projects, follow the link from his name at the top of this post. I know that I, for one, will be following Ryan's work from now on (and hoping that maybe he will give me one of them, someday, perhaps, you never know .....)