How a Painting Changes 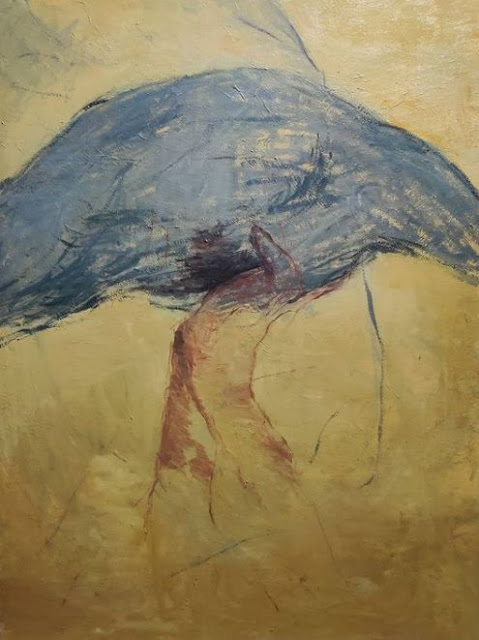 This oil painting rom my current series, Crow and Hands, is four feet by three feet. The version you see here was how it looked until yesterday. Even that was the result of working and reworking the canvas until there were about three previous layers with slightly different versions of the image.

But it still didn't look right to me. Incomplete. Like a sketch rather than a finished painting (if a painting can ever be truly finished).

So I decided, one more time, to rework the surface of the painting, keeping the paint as loose as possible, using a big brush and bold strokes, and aiming to finish quickly. I also took a small oil sketch as a reference point: 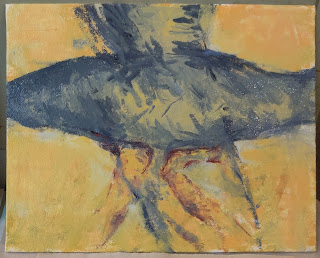 It's a similar idea: a bird shape flying horizontally near the top of the canvas, and hands reaching p from below. The tonality is also warmer, due to touches of yellow ochre, which as a reddish tone, rather than the slightly colder Naples yellow. So I followed the movement of this sketch, working quickly, using big strokes, and often not looking at the bigger canvas but keeping my eye on the sketch as my hand moved on the larger picture.

After about an hour of work, this is what emerged: 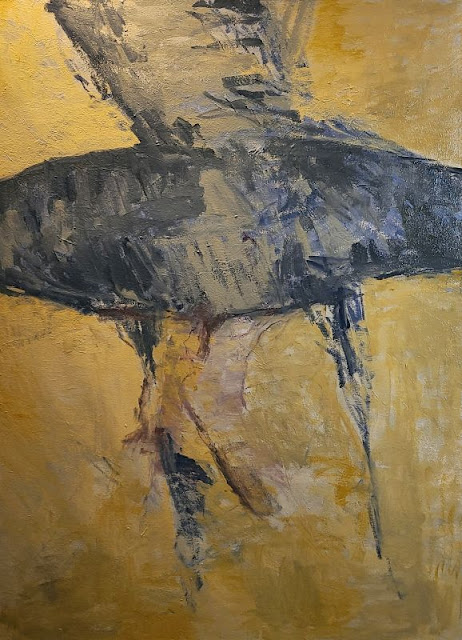 Much bolder, more definite, looser in a good way, warmer overall tone. Is it finished? Who knows! But if not completely done, it now feels very close.

Conclusion: this often happens in works of art, but particularly in painting. You work on something for months, sometimes, and then suddenly you finish the piece in one quick session. Painter Per Kirkeby called it the "final strike". The speed of the final execution is not to say that you've rushed things: that final quick session is only possible because of the long hours of labour that came before. Think of it as clearing the brush and trees so you can finally have room to uild the house.