Story of a Painting

This video clip has audio of me giving a brief description of how this large painting evolved over time, and was finished quickly while glancing at a small oil sketch.

What I couldn't say in 60 seconds: the painting began as a completely different image, possibly not even of a giant bird shape with hands reaching for it. The first version was painted in early 2019.

Then I overpainted that one so much that the surface became too clogged with paint, so I ripped the canvas off the stretcher frame and stretched a new, blank piece of primed canvas.

The next stage was a bird shape across the bottom of the canvas, and four arms+hands reaching for it. That version stayed more or less the same until a month ago.

Why did I change it again? Because it looked too much like an outline drawing, something waiting to be filled in rather than looking as if it had been brought to a final stage with any authority.

After a bit more than an hour, I stepped back. And it looked done.

Would it have been better or the same if I had just painted the blank canvas in the same loose and quick manner? Maybe. But sometimes you need all the hours of work, and the failures, to act as brush clearing before you finally find the right tree to plant. 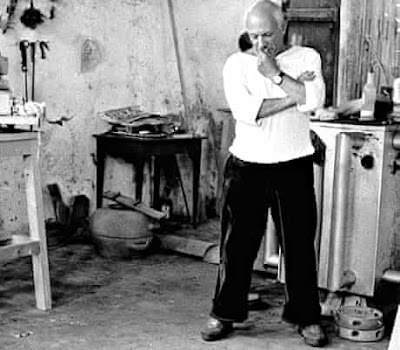 To paraphrase Picasso: a painting can be made quickly, but with thirty years' of though behind it.